Radio24syv obtained email correspondence between two employees at the Royal Danish Theater, the contents of which appeared to have confirmed the Chinese embassy had requested the theater to prevent Shen Yun from renting the theater for performances, according to a report published on Feb. 19.

Established in 2006, Shen Yun is a New York-based performing arts company that tours the world annually with productions that seek to revive traditional Chinese culture. They perform at over 150 theaters around the world every year, according to its website.

The company was founded by adherents of the Falun Dafa (also known as Falun Gong) spiritual practice, a meditation discipline that has been severely persecuted and banned in mainland China since 1999. Shen Yun’s depictions of the Chinese regime’s persecution of Falun Dafa, and of Chinese civilization as divinely inspired, have irked the Communist Chinese authorities, which have repeatedly tried to hinder Shen Yun performances since its inception, according to its website.

Beginning in 2007, Shen Yun has sought to perform at the Royal Danish Theater in Copenhagen. That year, the two parties came close to an agreement, with two performances on the table. But just before the parties were due to sign the contract, the theater pulled out abruptly, citing “logistical reasons,” according to Radio24syv.

Thereafter, the theater repeatedly rejected the company’s proposals, on the grounds that its artistic level did not meet the theater’s demands. This is in spite of Shen Yun selling out performances globally in some of the world’s premier venues, including two showings held at the Aarhus Concert Hall in Denmark in 2016.

At the time, the Danish newspaper Politiken reported that the Chinese embassy had tried influencing the theater to stop Shen Yun’s performances in Aarhus, but was ultimately unsuccessful. In September 2017, local Shen Yun organizers wrote a letter to Danish authorities, appealing for the company to be allowed to perform at the Royal Danish Theater.

According to emails obtained by Radio24syv, when Denmark’s Ministry of Culture requested a comment from the Royal Danish Theater, one of its employees revealed to another staff member that he or she had met with the Chinese embassy in August. “They [embassy] ended the meeting by asking if we had a dialogue with Shen Yun, and requested that we shouldn’t allow them to rent our facilities,” the email stated.

But theater director Morten Hesseldahl and culture minister Mette Bock said they were not aware of any pressure from the Chinese embassy and denied the accusation. Upon publication of the news, several prominent figures expressed outrage at what they perceive as the Chinese regime’s interference in Danish affairs.

In an interview with the U.S.-based Chinese language broadcaster, New Tang Dynasty Television (NTD), Bente Hagelund, president of the People’s University of Copenhagen, said that the recent news was clear evidence of Chinese interference. 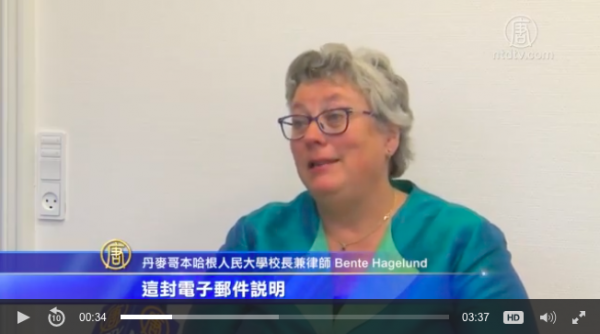 Bente Hagelund during interview with NTD. (Screenshot via NTDTV)

Soren Espersen, chair of the foreign policy committee in the Danish parliament, told the Danish newspaper Berlingske in an interview that the Chinese embassy’s actions were “chauvinistic.” “Why would they get to decide who gets to be on our stage, who gets to perform?”

Liberal Party politician Michael Aastrup Jensen told NTD that the Danish government ought to investigate such interference. “We should actually try to preserve the Danish way of life and Danish political system, which is we have no censorship, that we are okay with every position, that everyone has the freedom of speech,” he said.

Benny Brix, representing the local Falun Dafa Association, which invited Shen Yun to Copenhagen, said that he has tried conveying the fact of such interference to the culture minister for many years. “This is not something we fabricated. What we’re facing is an authoritarian power meddling with Danish arts and culture,” he said.