Helsinki, located on the southern coast of Finland (called Suomi by the Finns), has had more than its share of press since the Helsinki Summit. However, prior to its recent political exposure, this handsome “White City of the North” has long been an under-the-radar destination.

Nevertheless, it is one city that is truly worth getting to know. 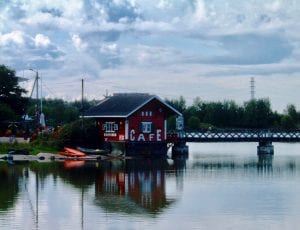 Helsinki lies very close to 60° North Latitude. This explains its abundance of light in summer months and the fact that around June 22, the night lasts about 1 hour 20 minutes. Finland’s unique culture and way of life can be attributed to its geographic location sandwiched between East and West. For more than half a millennium, Finland was part of Sweden. After which time the Grand Duchy of Finland was established within the Russian Empire.

Finns that you meet on a visit to Helsinki might appear to be reserved but looks can be deceiving. Finns like to have fun. Finland has a reputation for its rather wacky events such as a wife-carrying contest, mobile phone throwing competitions, and mosquito swatting events. Helsinki also created a wacky, welcoming “buzz” the year of the talking trash bins. Not only did the trash bins introduce you to the Finnish language, but they also played a musical thank you when you deposited your trash in them. During that time, the talking trash bins were placed near four of the most visited attractions in Helsinki: Sibelius Monument, Senate Square, Pohjoisesplanadi (the Esplanade) and Temppeliaukio Church (the Rock Church). 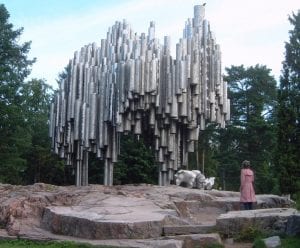 The Sibelius Monument, honoring Finnish composer Jean Sibelius, was unveiled in 1967. It is composed of 527 silver steel pipes. To some viewers, it is reminiscent of organ pipes and Sibelius’s beloved birch trees. To others, its silvery pipes “reflect the change of season and light, echoing birds’ song, sighing in the sea breeze and resonating furiously during a storm.” A bust of the composer sits on a nearby wall. Located in Sibelius Park, the monument site is a place for strolling, resting on nearby benches, or posing for pictures beneath the tubes.

The heart of Helsinki beats around Senate Square with its Government Palace, National Library of Finland, (the main building of the University of Helsinki) and the elegant Lutheran Cathedral. The buildings were designed by Carl Ludwig Engel between 1822 and 1852. Nearby is the colorful Market Square. 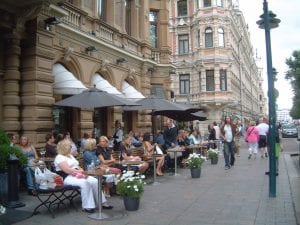 Pohjoisesplanadi is translated into the easily pronounceable Esplanade or Espa. This tree-lined boulevard stretches from the colorful Market Square, with its famous bronze Havis Amanda Fountain, to the Swedish Theater on Mannerheimintie Street. This showcase of Finnish design serves as a promenade and a place to relax.

The Temppeliaukio Church (“The Rock Church”) is an architectural gem (completed in 1969) that was carved from solid Finnish granite. The architects chose a rocky outcrop rising about 40 feet above street level, and blasted out the walls from the inside. A copper dome, the only part of the structure that is visible from the street, looks as if a flying saucer has landed in the midst of a quiet residential neighborhood. The interior ceiling of the dome, woven of copper strips, is connected to the raw rock wall by 180 vertical windows. The Rock Church is a popular venue for concerts. 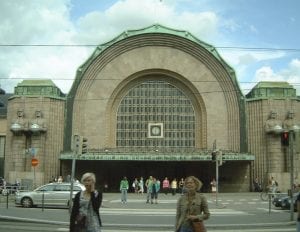 Check out the 1919 granite Central Railway Station, one of the best known symbols of Helsinki and considered the most important work of Eliel Saarinen. Its style represents the transition from National Romanticism to Functionalism. Two pairs of statues, on either side of the main entrance, hold spherical lamps that are lit at night-time. In 2013, Helsinki Central was chosen as one of the world’s most beautiful railway stations.

The 1990s saw the addition of two architectural gems in Helsinki. Kiasma, the contemporary art museum, aims at expanding and exploring an understanding of contemporary art. The Finnish National Opera (1993) offers a modern setting for opera and ballet. It is linked with the City Theatre and Alvar Aalto’s Finlandia Hall. In front of the Olympic Stadium, a most significant example of Finnish functionalism, is a statue of Paavo Nurmi. Nurmi was Finland’s most successful Olympic runner.

On Feb. 1, 2012, the year in which Helsinki was crowned the 2012 World Design Capital, the Kamppi Chapel (known as the “Chapel of Silence”) was completed on Narinkka Square in central Helsinki. The curved, windowless, wood-clad chapel soaring skyward like a humongous salad bowl, became popular immediately. The chapel welcomes everyone irrespective of religion, philosophy of life or background. It is a place, in one of Finland’s most lively urban spaces, where anyone can come to calm down and have a moment of silence.

Be sure to leave some time for shopping in Helsinki! The one place where you can satisfy all your Finnish shopping needs is the aforementioned street with the tongue-twisting name of Pohjoisesplanadi. Translated into the easily pronounceable Esplanade or Espa, this tree-lined boulevard stretching from the open market (at the South Harbor) to the Swedish Theater (on Mannerheimintie Street) is a showcase of Finnish design.

The question you will want to ask before you shop in Helsinki is: Kuinka paljon se maksaa? (How much does it cost?) The answer you will find is ‘Plenty’! However, you will be assured of fine merchandise. The potpourri of shops on the Esplanade offers fine merchandise known for its elegant simplicity, functionality, and quality. Finnish design reflects the characteristics of its people. Like the Finns themselves, their products reveal an affinity to nature. Finland is a land with millions of forests and billions of trees. In Finland they carve the wood with their hands and create a form with original Finnish spirit. Check out the following shops on the Esplanade.

Finnish birch bead rams residing on the shelves of the Aarikka shop are said to sing the song of Finnish wood design. In Finland, they call that form Aarikka. For over half a century, Aarikka has done fascinating things with wood. The delicious smell of Finnish pine and birch assaults the senses of shoppers as they enter the shop renowned for those adorable wooden ram sculptures. Pässi the ram is Aarikka’s most famous sculpture series.

Marimekko is a way of dressing…timelessly unique, simple and elegant. Marimekko, which means ‘Mary’s simple dress’, is a shop for people who associate quality of design with quality of life. Founded in 1951, the heart and soul of Marimekko’s designs are the bold prints and colors that come to life in the approximate one-million meters of fabric that are printed at their factory every year. Marimekko bears the banner of Finnish design all over the world.

Yes, iittala, the shop selling timeless design that will never be thrown away, begins its spelling with a lower case ‘i’. A small white ‘i’, in a tiny red dot, marks the sign of faultless glassware designed by renowned Finnish designers such as Tapio Wirkkala and Alvar Aalto. Alvar Aalto’s 1936 creation of his now famous Savoy Vase was the beginning of what has become known as “original Finnish glass design”. Today, that same Aalto vase, which can be seen in museums around the world, is still one of the most characteristic designs of iittala glasswork.

Helsinki, the capital city of this “Land of Light and Water” lies very close to 60° North Latitude. This explains its abundance of light in summer months and the fact that around June 22, the night lasts about 1 hour 20 minutes. Although Helsinki is particularly wonderful during its bright summer months, it is a city for all seasons… a place to shop…a place to stroll…a place to dine. It’s a Sibelius symphony…a steaming sauna (pronounced sow-nah)…and a midnight sun.

Finnish brothers killed by lightning as they heated sauna