These are heady times for Norway. The emergent Scandinavian superpower topped the table at the Pyeongchang Games, winning 39 medals, including 14 golds. An impressive feat for a country of 5.3 million people — all the more so when you consider that the government spends just $24 million a year on summer and winter sports.

And now Norway is also succeeding where it really counts — fiscally. The country’s $1.1 trillion US sovereign wealth fund, which invests government royalties from offshore oil and gas, grew by 13.7 per cent in 2017, adding $131 billion US to its coffers. The gain, announced this morning, was mostly due to last year’s global surge in stock prices.

The sovereign fund, the largest in the world, has almost two-thirds of its value invested in the markets, holding 1.4 per cent of all listed stocks globally. The fund saw large returns from its stake in tech companies like Microsoft, Apple and Tencent.

The fund is now worth around $200,000 US for every man, woman and child in Norway. Although the government has been skimming some of the gains to help finance its budget deficits, taking 61 billion crowns ($7.75 billion US) in 2017, and is proposing to take a further 101 billion crowns ($12.8 billion) in 2018. Norway is now announcing its intention to invest even more in the equity markets and to attempt to influence how companies operate when it comes to the environment.

This year, the sovereign fund will buy another $40 billion in stocks, pushing toward a target of 70 per cent of its value. It says it will use those positions to demand more accountability with regards to controlling greenhouse gases produced by companies it invests in.

In an interview with Reuters today, fund CEO Yngve Slyngstad said he will start by focusing on electricity producers. The fund’s plan is to demand cuts in coal use, and more in-depth research on how climate change-related droughts, heat waves and floods might affect its future earnings. Then the fund will review its investments in all types of natural resources.

The muscle-flexing comes on the heels of the fund’s move last fall to remove all oil and gas companies — including Norwegian firms — from its benchmark index, and divest itself of its stakes over time. At present, those investments are worth around $37 billion US and include a 2.3 per cent holding in Royal Dutch Shell, along with 1.7 per cent of BP. The proposal, which is due to be approved by Norway’s parliament this spring, will also affect 253 Canadian oil and gas firms, including Enbridge Inc. (a 0.88 per cent stake) and Suncor (a 0.99 holding.) 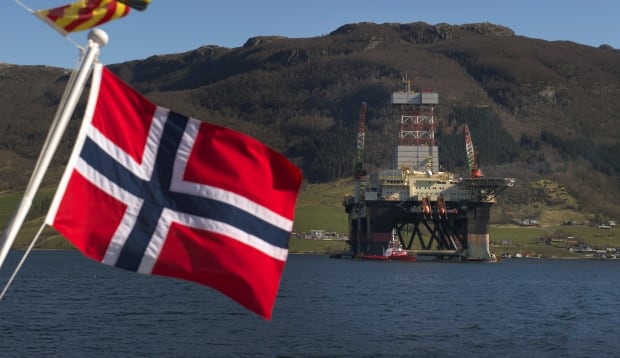 A Norwegian flag flies from a vessel near the Scarabeo 8 deepwater oil drilling rig off Olensvag, Norway. The country’s central bank is considering whether to order the fund to blacklist companies in the oil, steel and concrete sectors for producing too much greenhouse gas. (Kristian Helgesen/Bloomberg via Getty Images)

And there could be more environmental tough love forthcoming. The country’s central bank is set to decide soon on whether to order the fund to start blacklisting companies in the oil, steel and concrete sectors for producing too much greenhouse gas.

It’s no small threat. Oil prices plunged after last November’s divestment proposal. Money is, after all, power. The government fund’s investments have added 4,000 billion crowns — $509 billion US — to the small country’s bottom line since its inception in 1990.